World's Fair of 1893 Photographic Adventure Volume 2 is out! 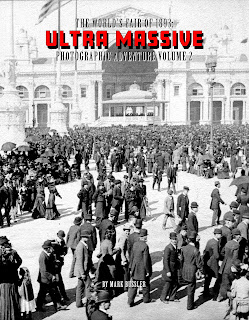 My newest history book released this month, The World's Fair of 1893 Ultra Massive Photographic Adventure Volume 2! This follow up to 2017's Volume 1 focuses more on the interiors of buildings, crowds and beautiful drawings of the event that entertained more than 27,000,000 people at the end of the 19th century.

330 pages. Black and white. Available in Kindle eBook and Print from Amazon.com

If you love learning about the "White City" and want to see more incredible images, many of which are extremely rare, you'll dig this book. Buy from Amazon: https://www.amazon.com/dp/1719937974

Dig even deeper into the White City with this ultra-massive photographic adventure that looks inside the buildings and follows the crowds of people who were there! The World's Fair of 1893 was the greatest event on earth that entertained more than 27,000,000 people summer. We've seen the beautiful exterior photographs of the Ferris Wheel, the Grand Basin, the Court of Honor, and the enormous Manufacturers and Liberal Arts Building. This second installment of the acclaimed Ultra Massive series goes inside the massive structures of the World's Columbian Exposition to showcase the long-lost event that changed the world from the inside out. Incredible rare photographs, drawings, and prints - many of which have never been published before - highlight the people at the fair and the interiors of its greatest buildings like Machinery Hall, the Manufacturers Building and the Electricity Building. Admire the crowds, the workmanship, the displays and the miles of machinery that set the stage for the 20th century. Written and designed by filmmaker and writer, Mark Bussler (Expo: Magic of the White City, Westinghouse, Classic Game Room), this stylish book is filled with crisp, black and white imagery of the Fair that features rare photographs from period sources and a private collection.
at September 16, 2018 1 comment: Links to this post

Ultra Massive 4 is all about Sega Genesis, if you love Genesis (and Mega Drive) you'll LOVE this book! Ultra Massive 5 is an enormous 330 page adventure through video game controller design with my trademark funny reviews. It's unique and really fun, part one of two.

Thank you! Stop back often, I'm releasing the follow up to my best-selling World's Fair Photographic Adventure next! -Mark
at September 09, 2018 No comments: Links to this post 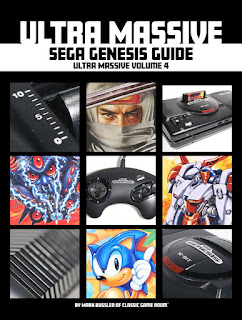 Feel the Blast Processing flow with the most entertaining and comprehensive Sega Genesis collector's guide ever created! Come for the 16-bits, stay for the TRUXTON!

Contained within these pages is a fun, stylish look at the Sega Genesis and everything that makes it special; the hardware, the controllers, the add-ons, the games, it's all here in glorious full color.

If you love video games, Pong, and spaceships, you'll love the Ultra Massive series and may find yourself inspired to begin collecting for something new! Find yourself immersed in the world of Sega Genesis 16-bit High Definition Graphics!
at July 24, 2018 No comments: Links to this post 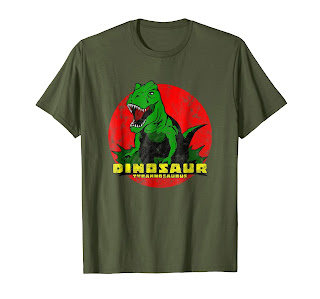 These select Turbo Volcano brand shirts are on SUPER DEEP DISCOUNT SALE for the next few days. Get them while they're on sale pricing! Dinosaur T-Rex shirt: https://www.amazon.com/dp/B07CMMMKLL

I Program In Basic: https://www.amazon.com/dp/B07C6PMVYN

New release: UNSUBSCRIBED! How Creators Can Succeed When The Platform Fails 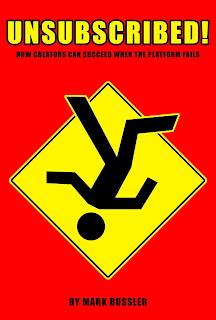 After working in Internet self-publishing for nearly 12 years, I decided it was time tell my story concerning platform diversification. I have many opinions about the "industry," and can give loads of advice when it comes to content creation and, more specifically, distribution. It is hard to get noticed in an oversaturated market, and quality does not mean success.

That's excellent advice if you are creating as a hobby, but if you're doing this for a living, or even some side earnings, you need to get way smarter about using multiple platforms to support your business and your creation. Do not rely on one platform!

UNSUBSCRIBED is a funny story about the time that I relied on one platform (oh, that was a bad idea) and how I pulled a Crazy Ivan to turn my business around and come out ahead. This is a must-read book for all aspiring content creators who want to succeed. Hoping to be discovered won't work, changing platforms is a better approach.

UNSUBSCRIBED! is available on Amazon as a print book, Kindle and Kindle Unlimited.https://www.amazon.com/dp/1983304638

Thank you and enjoy! 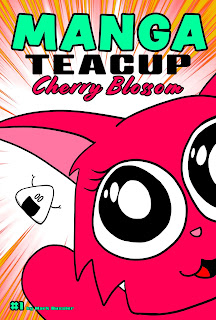 What happens when Edit-Station 1, Surf Panda, Heyzoos, and Senor Commodore Rice Ball create their own manga about a kitten who lives in a teacup? Read Manga Teacup Cherry Blossom and find out!

This was an experimental project I drew in the evenings while testing some new software and it breaks from the rest of the CGR Universe in its own special way. This is a short read, and a budget-priced book and Kindle release. Makes a fun short read and packs good laughs!

From time to time I like to put out short books like this and play around with my art and writing, give it a show why not? Let me know what you think; I love the character of Senor Commodore Rice Ball. Manga Teacup Cherry Blossom! 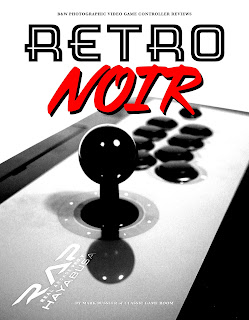 Prepare yourself for my next book, Retro Noir, which I plan to release in July 2018 on Amazon.com. Retro Noir looks at video game hardware in a new and interesting way, unlike anything that you have ever seen before. When artistic photography and smart-ass sarcastic writing collide, you get one of my books! Enjoy.

The first Retro Noir is all about video game controllers! Joysticks! Paddles! Fight sticks! If it controls video games, it is fair game, and I photographed a LOT of controllers for this book. Experience the art of video game controller design through the ages as I showcase these plastic peripherals with a massive gallery of unique black and white photographs. Each accessory is described and reviewed in my unique way.

Retro Noir is a big book, clocking in at well over 300 pages. If you like video game controllers and the art of industrial design you'll love this. Coming in July! Follow me on all my social media fronts to be alerted to the release date :)

www.classicgameroom.com
at June 06, 2018 No comments: Links to this post

What is a Turbo Volcano?

What is a Turbo Volcano? Good question, Turbo Volcano is a clothing brand and a series of somewhat-related comic books.

Turbo Volcano started life as a reverb-heavy shout-out in Classic Game Room reviews back in the day (like two years ago.) I liked it so much I bough the URL and started to draft a sci-fi space opera graphic novel called Turbo Volcano: Heavy Metal Mercenaries. Like most of my comics, it is backlogged behind a popular series of video game collector's guides called the Ultra Massive Series. I need more clones!

The name is so good though, TURBO VOLCANO. It says everything and nothing at the same time. It's easy to remember and cool. Way cool. Lando cool.

In April I launched a series of t-shirts and related clothing on Amazon using the name, Turbo Volcano! When you search for Turbo Volcano on Amazon you'll find most of my really outrageous shirt designs.

I'm still experimenting with my artwork and logos. Most of what I create is a mad combination of 1970s and 80s t-shirts (which I love) combined with monster movies, 80s beach gear and science fiction. From there, sometimes, I'll create more basic retro designs. Other times I'll make a shirt and hate it, only to come up with something based on it which works really well. I'm also making some kids shirts and challenge myself daily with cute designs, which aren't my thing but they sell.

In two months Turbo Volcano has surpassed a decade-old YouTube channel and my Amazon video work, and I've only just gotten started. This is a pleasant surprise because I greatly prefer design work to video work and am thrilled to challenge myself with both new, and unconventional styles daily. I'm drawing three comics at present (Ethel 2, Cosmic Death Brick Adventures and Magnum Skywolf) and find myself pulling inspiration from everywhere. It's a lot of work, yes, but more fun and productive than the dismal shit-show that YuuGlube has turned into.

BONUS! RANDOM DAILY SHIRT SALE This summer I'll be putting one shirt on sale daily. I usually post the announcement on Twitter so make sure to follow me there, but maybe I'll do it here too. This is random, and I'm erratic. You never know what it could be.

Today's special is a cute little panda drawing based on my 2018-era Surf Panda design. Save five bucks, boom.

Thank you again and look forward to more weird-ass shirts from me, and probably a lot of unexpected designs too. I'm also doodling a silly comic on my site called Turbo Volcano: Phase 1 with Edit-Station 1 for yuks, it actually leads up to the main comic book with the mercenaries. You'll see... TURBO VOLCANO (reverb, delay!)

Books in production for late 2018!

There's lots going on in deep space as I frantically write several books that should make it in time for the end of the year. Here's what you can look forward to! Subscribe to me on Amazon.com to receive updates: https://www.amazon.com/Mark-Bussler/e/B00IQ9WH44

How To Make T-Shirts That Sell (working title)

Ultra Massive Video Game Console Guide Volume 3 has launched across the galaxy! The third book in my Ultra Massive series features photograhs, reviews, and collecting advice for more than 20 game consoles including Sega Saturn, Atari Lynx, ZX Spectrum, Commodore 64, PS4, and more! Available at https://www.amazon.com/dp/1982982551
at June 03, 2018 No comments: Links to this post

World's Fair of 1893 Photographic Adventure Volume 2 is out!

My newest history book released this month, The World's Fair of 1893 Ultra Massive Photographic Adventure Volume 2 ! This follow up to ...